Las Vegas has already taken the Raiders from Oakland. Now, Sin City wants to take Major League Baseball’s Oakland Athletics, and that deal seems more and more likely as Oakland has moved very slowly toward committing to build a new stadium for the team. Check out the upcoming games for your favorite teams (like the Detroit tigers schedule ), so you can go to the stadium with your friends and enjoy the atmosphere while cheering on your favorite players.

Every professional sports team looking for a new arena or stadium uses cities desperate for a team to leverage their home market.

That’s how the San Diego Chargers ended up in Los Angeles. They tried to get what they wanted from their former home, but the city declined. The team then had to make the move to become the second team in a city that has never shown itself willing to support even one National Football League franchise.

In most cases, teams are using the idea of moving as a pure leverage play with their current home. Most teams don’t want to leave behind an established fanbase unless they’re moving to a much better market.

In the case of the A’s, however, Las Vegas is both a better market and close enough to Oakland for the team to maintain its current fanbase.

The Athletics have been negotiating with a number of sites on and adjacent to the Las Vegas Strip while also continuing to at least communicate with Oakland.
Now, a key figure in deciding whether the A’s can make the move to Las Vegas has made clear that Oakland has to speed up its process.

Baseball’s Commissioner Weighs in on the A’s Move

Major League Baseball appears to support the idea of the A’s moving to Las Vegas. The league in late June waived any fees associated with a move, the Las Vegas Review-Journal reported.

“The fee varies on a case-by-case basis, but it is estimated the fee would be in the hundreds of millions of dollars range,” the paper reported.

“The Raiders’ relocation fee charged by the NFL was $378 million when they made the move to Las Vegas in 2020. Golden Knights’ owner Bill Foley paid a $500 million expansion fee to the NHL to land the team in Las Vegas. Expansion fees tend to run higher than relocation fees.”

Now, MLB Commissioner Rob Manfred has amped up the pressure on the city of Oakland, saying that the city needs to move quickly to make a binding deal with the team on building a new stadium. If that does not happen, relocation would become the best option, the Associated Press reported.
“I was at the Coliseum myself recently,” he told the Baseball Writers’ Association of America on July 19 before the All-Star Game. “The condition of the Coliseum is a really serious problem for us. I’ve said it, this is not news. It is not a major-league-quality facility at this point.”
Manfred made clear that the time for Oakland to act was running out, and he delivered a message to Oakland Mayor Libby Schaff.

“Mayor Schaaf continues to work hard to try to get an arrangement, an agreement to develop the Howard Terminal site,” Manfred said. “I’m hopeful that that can still happen. And I said this recently and I’ll repeat, it needs to happen now. It needs to be done.”

The Raiders and Golden Knights play to sold-out crowds paying some of the highest prices for any arena or stadium, according to a study from Money.co.uk, titled “The Most Expensive Sports Stadiums in North America.” The costs include the price of game tickets, hot dogs, soft drinks, parking, taxi/ride-share, and Airbnb/hotel.

“Allegiant Stadium, home of the Las Vegas Raiders, came in third on the list, with an overall cost of $723. Meanwhile, T-Mobile Arena, where the Golden Knights play, came in fourth, with a total cost estimate of $676,” wrote TheStreet’s Brian O’Connell.
“The only stadiums that were more expensive were Nissan Stadium in Nashville, where the Tennessee Titans play, and Bridgestone Arena, also in Nashville, where the NHL Predators team plays. Nissan stadium’s cost estimate was $754, while Bridgestone’s was $751.”
The ability to sell tickets to the tourists who flock to Las Vegas and will buy seats and luxury boxes makes the city very attractive to Major League Baseball.

Manfred has made very clear, without directly saying it, that he wants the A’s in Las Vegas, which makes it very likely to happen.

Fri Jul 22 , 2022
salihkilic/iStock by way of Getty Images Robust travel need at current is not most likely to last extended, in accordance to a new investigation from Truist. As these kinds of, expectations for on line travel names like Scheduling Holdings (NASDAQ:BKNG), Tripadvisor (NASDAQ:Trip), Trivago (TRVG), and Expedia (NASDAQ:EXPE) should be tempered. […] 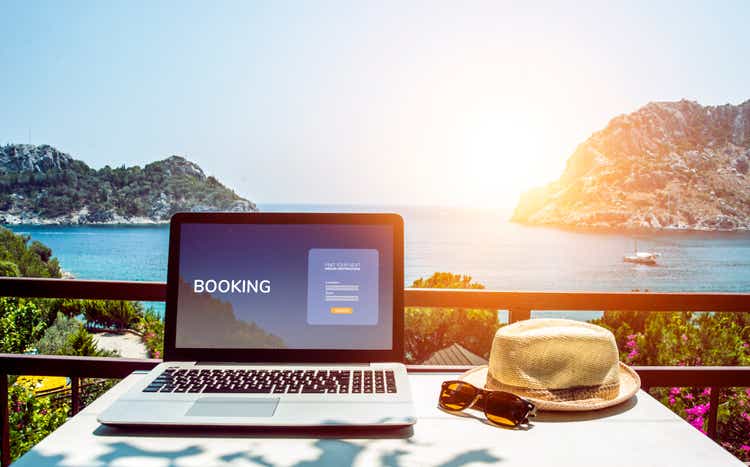