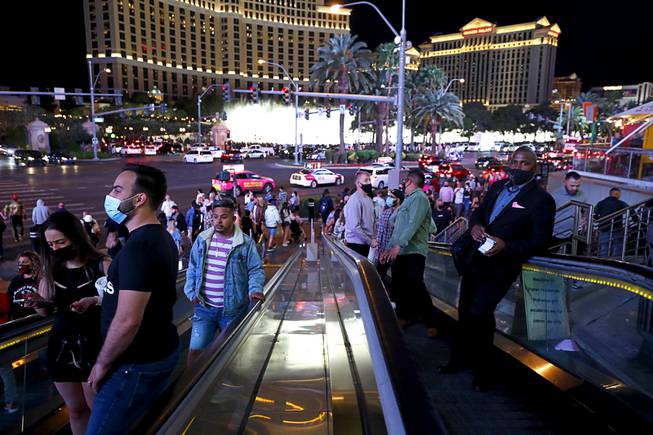 In the summer of 2020, during some of the darkest days of the coronavirus pandemic, economic analyst Jeremy Aguero predicted it could take up to three years for Las Vegas to bounce back from its pandemic-induced funk.

Nearly 10 months after making those comments before the Las Vegas Global Economic Alliance, Aguero, principal at Applied Analysis, said Southern Nevada was ahead of schedule.

“There’s an incredible amount of optimism out there,” Aguero said. “We’re hearing that optimism from almost every sector. I think there’s a collective sigh of relief being felt.”

Headed into Memorial Day weekend, crowds are returning to the Strip. Casinos have taken down Plexiglas barriers at gaming tables, opened more nightclubs and restaurants, and a growing number of fully vaccinated people are taking off their masks to take in what Las Vegas offers.

Casino revenue is up. More and more people are flying to Las Vegas. And conventions, one of the final pieces to a full economic recovery, are returning.

For the first time in a year, Nevada casinos in March collected more than $1 billion in gaming revenue.

Gaming revenue has slowly been climbing back since casinos started reopening June 4, 2020, after an unprecedented 78-day shutdown to help curb the spread of the virus.

In Clark County, which includes the Las Vegas Strip, gaming revenue was about $893 in March, up 63% from the same month in 2020. Casinos were closed for half the month in March 2020.

In April, Wynn Las Vegas recorded its most lucrative month for slot machine revenue since it opened more than 15 years ago.

Jonathan Halkyard, MGM’s chief financial officer, said weekend occupancy at MGM hotels was 85% in March, getting closer to the 97% prepandemic rate in March 2019.

MGM hotels account for about 31,000 rooms on the Strip, including 6,000 at its largest property, the MGM Grand.

The story is largely the same for Caesars Entertainment, which operates eight resorts on the Strip, along with the nearby Rio on Flamingo Road.

Weekend occupancy rates at the company’s Strip hotels reached nearly reached 85% in April, with weekend rooms expected to be sold out in the near future, officials said. 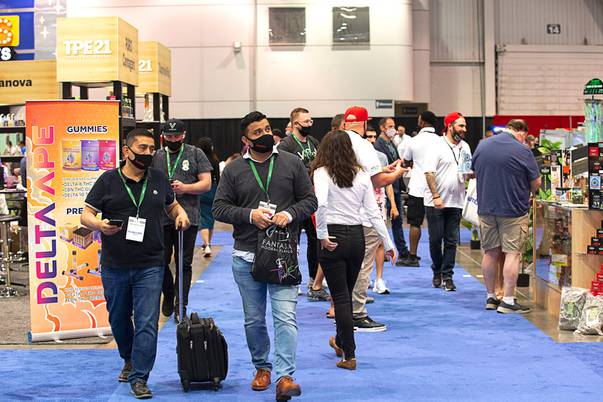 Attendees are shown during the Tobacco Plus Expo (TPE21) at the Las Vegas Convention Center Wednesday, May 12, 2021. The convention, the first at the LVCC since the COVID-19 shutdown, is expected to attract 350 exhibitors and 4,500 attendees.

In 2019, Las Vegas welcomed 6.6 million conventioneers. Since March 2020, that number had been virtually zero.

The first convention to return was the Tobacco Plus Expo in May, which brought about 5,500 people to the Las Vegas Convention Center.

Conventions and trade shows were always going to be a big part of the Las Vegas comeback. They are responsible for more than $11 billion in annual economic impact to Southern Nevada, according to the Las Vegas Convention and Visitors Authority.

The next noteworthy trade show on the calendar is next month’s World of Concrete.

With the pandemic came a blackout of nearly every form of live entertainment in Las Vegas. But as restrictions on showroom and arena capacity have eased, performers are returning to the stage.

Last month, “Mat Franco: Magic Reinvented Nightly” returned to at the Linq, and the the Comedy Works showroom at the Plaza reopened.

The popular “Atomic Saloon Show” resumed in early May at the Palazzo, and “Absinthe,” Spiegelworld’s bawdy circus/burlesque show outside Caesars Palace, is back.

Electronic musician Illenium is scheduled to perform the first-ever concert at Allegiant Stadium on July 3, when he brings his Trilogy show to Las Vegas. A week later, July 10, country music star Garth Brooks is set to perform at Allegiant Stadium. The concert was originally planned for February, but was postponed because of the pandemic.

The annual Electronic Daisy Carnival, which brings tens of thousands of music lovers to the Las Vegas Speedway over three days, was moved from its traditional late-spring dates to Oct. 22-24 this year. 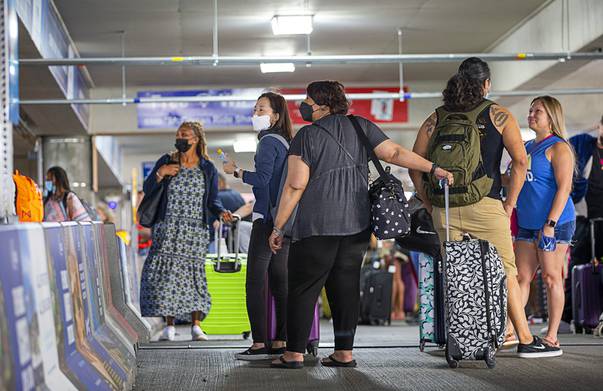 People wait at the rideshare pickup area in the Terminal One parking garage at McCarran International Airport Thursday, May 20, 2021.

At the height of the pandemic, McCarran International Airport, typically one of the busiest airports in the country, was a ghost town.

In April and May 2020, about 550,000 passengers departed or arrived at the Las Vegas airport, down from some 9 million during the same period in 2019.

Those numbers are steadily increasing. In April, some 2.9 million passengers passed through McCarran, up from 2.5 million in March and 1.6 million in February.

International travel remains significantly down because of restrictions still in place. In April, the airport reported about 31,000 international passengers, down more than 90% from the same month in 2019. 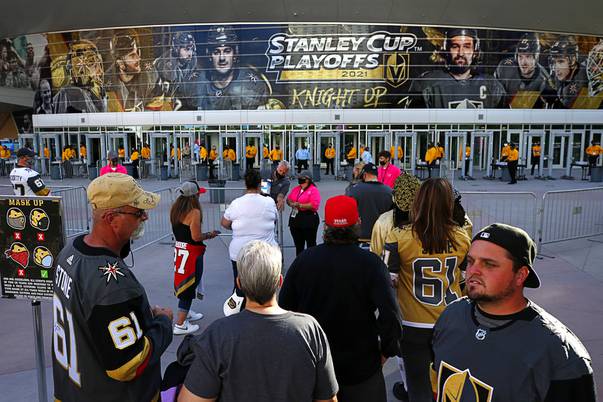 Vegas Golden Knights fans wait to enter T-Mobile Arena for Game 2 of a Stanley Cup playoff series against the Minnesota Wild Tuesday, May 18, 2021.

Earlier this year, as fans were allowed back into T-Mobile Arena for hockey games, crowd sizes for Vegas Golden Knights were severely limited, but that’s changing.

With eased restrictions, more than 12,000 fans made their way into T-Mobile Arena — capacity of over 17,000 — for the team’s Game 5 opening-round playoff series matchup against Minnesota. A similar crowd is expected for tonight’s Game 7. Should the Golden Knights continue onto the second round of the playoffs, it is expected that they would play before full-capacity crowds at T-Mobile since COVID-related capacity limits are being lifted in Clark County as of June 1.

On Monday, the Las Vegas Aviators, the Triple-A minor league affiliate of the Oakland A’s, announced they would open the Las Vegas Ballpark in Downtown Summerlin to full capacity starting with the team’s June 10 game against Reno.

The ballpark, which can accommodate about 10,000 people, will also host its first-ever concert June 26 when Dolyniuk plays the venue.

Other Las Vegas sports teams, including the WNBA’s Aces, are playing in front of fans again too.

On May 21, the Aces played their first game in front of home crowd since the start of the pandemic, beating Los Angeles in front of announced crowd of 1,972 at Michelob Ultra Arena at Mandalay Bay. The Aces return to Mandalay Bay tonight and Sunday for games against the Indiana Fever.

The Raiders played their inaugural season at Allegiant Stadium without fans in attendance but are scheduled to open their fan-filled 2021 home season with a “Monday Night Football” matchup Sept. 13 against the Baltimore Ravens. A preseason tilt against the Seattle Seahawks is set for Aug. 14 at Allegiant. Capacity at the stadium is 65,000.

The Las Vegas Speedway welcomed roughly 15,000 fans for its NASCAR weekend in March, after its postseason races in September 2020 were held with no fans in attendance. The speedway expects to be able to operate at full capacity for its fall NASCAR weekend, Sept. 24-26. Capacity at the speedway is 80,000.

Heavyweight boxers Tyson Fury and Deontay “The Bronze Bomber” Wilder are scheduled to fight July 24 at Allegiant Stadium with the winner taking home the WBC and The Ring titles. Another headliner fight, with Manny Pacquiao squaring off against Errol Spence Jr. is set for Aug. 21 in Las Vegas at a venue that is still to be determined.

Meanwhile, UFC 264 with a main event featuring Conor McGregor agains Dustin Poirier takes place July 10 at what is expected to be a full-capacity T-Mobile Arena.

The scene was a reminder of what Las Vegas once was and what it is sure to be again once the pandemic fades away completely.

One concert-goer tweeted a panoramic video of the frenzied scene with the words “Vegas is healing!”

Live music will return to the Fremont Street Experience next week during an event called Downtown Rocks Again. A lineup of bands will play from midnight Monday until 4 a.m. Tuesday.

The return of events and downtown office workers is a sure sign the area is on the mend, said Carolyn Wheeler of the Downtown Vegas Alliance, a nonprofit business trade organization.

“There are more reasons than ever to come downtown right now,” Wheeler said.

The annual Life is Beautiful festival is back after a year’s hiatus with artists Billie Eilish, Green Day and Tame Impala headlining over three nights, Sept. 17-19 in downtown Las Vegas. 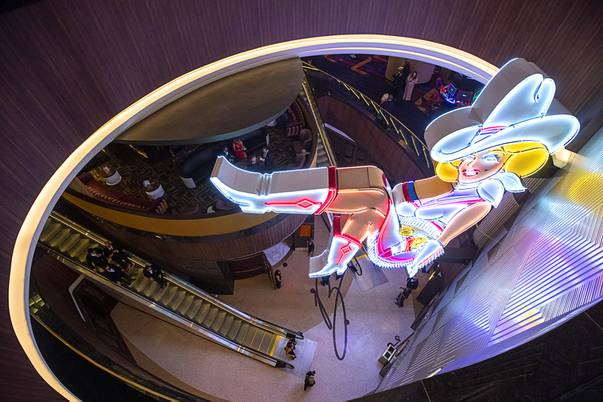 A view of the restored Vegas Vickie sign from above at Circa in downtown Las Vegas Tuesday, Oct. 27, 2020.

Resorts World Las Vegas, a $4.3 megaresort on the north end of the Strip opens June 24. The 3,500-room resort was built on 90 acres where the old Stardust used to sit.

It is the first new resort built from the ground up on the Strip since the Cosmopolitan in 2010.

In downtown Las Vegas, Circa Las Vegas, which cost about $1 billion to build, opened in October 2020. It was the first downtown casino built from the ground up since 1980 with the Sundance, which later became Fitzgeralds and now The D Las Vegas.

And in March, the rebranded and remodeled Virgin Hotels Las Vegas, formerly the Hard Rock, opened just east of the Strip.

Few Vegas experiences are as universal as the buffet, which were among the first casualties of the pandemic. Now, the Las Vegas buffet is making a comeback.

The buffet at MGM Grand is reopening for breakfast and lunch next week, and the Bacchanal Buffet at Caesars Palace opened last week. Some parts of the experience, however, might change, such as the use of pre-dished items instead of people serving themselves.

This is likely one of the least popular indicators that Las Vegas is rebounding.

Starting on Tuesday, MGM will begin charging for parking at its Strip resorts, though locals will receive three hours of free parking. Daily rates range from $15 to $18, depending on the property.

Self-parking has largely been free at Strip garages since casinos started reopening in June.